Why are you in this industry/occupation?

I’ve always loved puzzles, fixing things, and figuring out new ways of doing stuff. This meant that I loved maths in high school, and went on to be a mathematician. As I started uni at 15, I had a few extra years up my sleeve and happily fell into a double degree with electrical engineering, not that I’d really heard of it before. I haven’t really looked back since then!

As an electrical engineer, I’ve worked on projects including a brain-controlled car which could be used to assist paralysed patients and a low-cost digital stethoscope which plugs into healthcare workers phones to be used in under-resourced clinical settings to detect pneumonia in children. My most recent project includes developing a robot which children can teach how to write, so that those with handwriting difficulties can be in the position of a teacher for once, hopefully boosting their self-esteem and motivation. I never imagined that these sorts of positions could exist during my studies, but the beauty of the STEM industries is that you have the potential to apply the skill set you develop at uni to a range of projects that is growing.

What are the benefits?

To me, the best part about my work is that it’s at the intersection of different passions of mine. On one hand, I would happily do maths and puzzles all day just for fun because it’s something that I enjoy doing; I’m not sure why, exactly – I just love it. But on the other hand, I want to have a career that impacts the world in a way that I can really stand up and be proud of; I want to help people, somehow. And I’m really fortunate to have discovered different jobs that let me have the best of both worlds, with no need for compromise.

On top of this, I don’t think I have any friends who have graduated from either degree (or civil, mechanical, software engineering) and haven’t found a job. I didn’t think much about this sort of thing when I was younger, but I am realising now how much easier life becomes when your industry is in demand. And it’s not just in Australia, either – skilled migration is possible for a huge list of other countries, meaning it’s easier to get visas to move around with your work.

What are the drawbacks?

Occasionally I get tired of being one of few females in a room, which is why I get involved with groups which bring together women in STEM. These groups can be found in all different cities now, and I personally find that they make a difference in keeping me from ever feeling that I’m out of place.

I will also seek out positions where gender representation is taken seriously. As it turns out this is becoming easier with time, as companies are realising that diversity should actually be one of *their* priorities as well, for a whole range of reasons (including economical).

Why do you encourage other women and girls to consider this industry/occupation?

I feel like I just stumbled upon engineering when I was looking for a second degree to go with my maths bachelors, and then it turned out that I loved it. So that’s one reason that I go to schools to promote engineering in general, because I felt like it wasn’t in my vocabulary at all during school, and I would hate for someone to miss out on such an opportunity because no one had ever suggested that they consider it.

The other reason I try to promote my experience with STEM is because of the stereotypes for these fields that I feel are quite misleading. I think that when I was in school, if someone had’ve asked me what I should study if I want to help people/change the world, science and engineering definitely wouldn’t have been my first answer. I probably would have said something like nursing, teaching, or social work (fields which happen to be traditionally female-majority), and I wouldn’t have realised that an electrical engineer could also have an influence on these areas, if you just use your imagination. 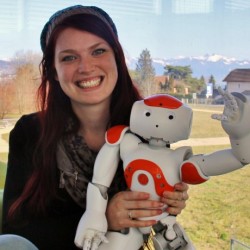 Find a Role Model in:

eS4W has produced additional resource material that will provide information about non-traditional occupations to the young women at your school.